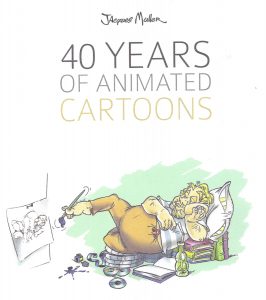 Jacques Muller grew up in France and, after doing his compulsory military service, got a job doing storyboards on the France 3 television series, ‘Il était un fois… l’homme’ (‘Once Upon a Time… Man‘) from 1978.  Later in 1981, he became friends with Alain Costa who was working at Paul Grimault.  Both of them were enticed to go to Australia, and worked together at Burbank Studio in Sydney – on ‘A Christmas Carol‘ (1982), ‘Great Expectations‘ (1983), ‘Sherlock Holmes and the Baskerville Curse‘ (1983), and other films.  Costa left and Muller stayed on in Australia – working at Hanna-Barbera Australia and Yoram Gross Films.  Muller and Brenda McKie started their own small studio in Sydney.  They were approached by Kennedy/Marshall for a quote on the film, ‘Babe,’ which was ultimately not made until 1995.  They made a four-minute trailer for a feature film, ‘The Adventures of Eloanh‘, which was taken to Cannes but was not picked up for production. 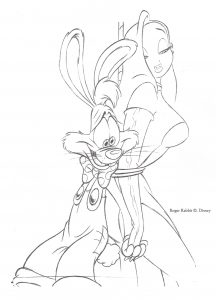 Costa got on to the Roger Rabbit crew in London and convinced both Muller and McKie to come to London.  On the strength of their work on the film trailer, they were both hired to the Roger Rabbit crew at The Forum.  After ‘Who framed Roger Rabbit,’ Muller accepted a position as Manager of Character Art for Disney Merchandising in Europe, but his love for animation drew him to Los Angeles.  In January 1989 he was on the ‘Tummy Trouble‘ crew at Disney in Glendale, followed by ‘The Rescuers Down Under.‘  He had been hired initially to work on ‘Beauty and the Beast‘, but the project – initially helmed by Dick Purdom, in London – had been delayed by Jeffrey Katzenberg of a fundament change in direction and script re-writes.

He went back to London to work at Spielberg’s Amblimation on ‘We’re Back! A Dinosaur’s Story,’ and eventually at Bluth/Sullivan in Dublin on ‘Thumbelina,’ and ‘The Pebble and the Penguin.‘  He then went back to the U.S., where he worked at Warner Bros. on ‘Space Jam‘ and ‘The Magic Sword: Quest for Camelot.‘  He worked at ILM on ‘Small Soldiers,‘  ‘Star Wars: Episode I – The Phantom Menace,‘ and ‘The Adventures of Rocky and Bullwinkle.‘  He went to Scotland to work on Sylvain Chomet’s ‘The Illusionist,’ released in 2010.

Since then Muller has been a Senior Lecturer at Nanyang Polytechnic SIDM school in Singapore and even found time to do the cover art for Gary K. Wolf’s latest Roger Rabbit novel, ‘Who Wacked Roger Rabbit,’ and write his memoir, ‘Jacques Muller – 40 Years of Animated Cartoons,‘ which gives an inside look at an animator’s global journey and is illustrated with many photos, cartoons and caricatures from along the path.  The book is published through Partridge Publishing and is available at Amazon. 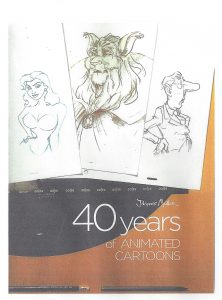