Back in the late 1980s Disney had an active in-house Comic Strip Department as part of the Merchandising Division.  Floyd Norman had come back to Disney and was working with Merchandising.  The group also included extraordinary artists such as Daan Jippes.

The film, Who Framed Roger Rabbit, had been released with critical acclaim and box office success.  Theatrical shorts were in production to build the Roger Rabbit franchise in anticipation of a feature length prequel.  Roger Rabbit provided opportunities for wonderful gags and the Disney Comic Strip Department developed samples to present to King Features Syndicate.  A newspaper comic strip would provide another avenue to broaden the awareness of Roger Rabbit and enhance the franchise.  The intent was to integrate still photography into the comic strip.  This was not a novel concept – this form of comic strip is called a fumetto, which has been very popular in Italy.  What makes the concept especially interesting is that introducing humans to a comic strip with cartoon characters plays off the introduction of toons to the live-action film, Who Framed Roger Rabbit.  In fact, this would bring Roger Rabbit back to his origins as a character in Gary K. Wolf’s novel, ‘Who Censored Roger Rabbit?’  In the novel, toons spoke in word bubbles and they would be photographed for appearances in comic strips.  Artists in the Comic Strip Department took on the role of the live-action characters for these experimental samples.

Another passion of mine is Monty Python – and there is a connection between Monty Python and fumetti.  Terry Gilliam graduated for Occidental College in Los Angeles and moved to New York City.  He met Harvey Kurtzman, who had been the editor of MAD magazine and then left to found the satirical magazine, Help!.  Kurtzman eventually hired Gilliam as an assistant editor.  Help! introduced many underground comic artists, such as Robert Crumb, but it also included fumetti.  NYC-based performers such as Woody Allen, Orson Bean, Milt Kamen, and Tom Poston ‘acted’ for the photography of various fumetti.  John Cleese happened to be in New York City in the Broadway musical, Half a Sixpence, and was asked to perform for the classic fumetto, ‘Christopher’s Punctured Romance,’ about a man who falls in love with a Barbie doll.  It was at Help! that Terry Gilliam and John Cleese first met.  They would work together again as members of the Monty Python troupe.

As it turns out, newspaper comic strips just weren’t as popular as they had been and King Features Syndicate gave it a pass.  Even though several scripts were written and development work was done on a follow-up feature film, it did not proceed.  The film rights to Roger Rabbit were co-owned by Disney and Steven Spielberg’s Amblin Entertainment.  Amblin and Disney just couldn’t agree, and the energy for a film sequel dissipated. 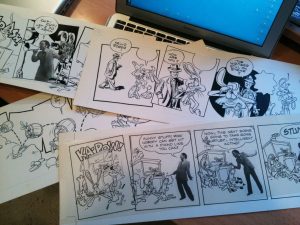 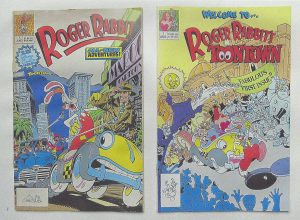