Ron Miller died on February 9, 2019.  Thereafter, on Facebook and other social media forums, came an outpouring of posts on what a nice and decent person he was.  Many of the posts were by people who may have vilified him while he was President and CEO of Walt Disney Productions.  Time, and comparison with others, tends to put those feelings into context… and the prevailing wisdom is that he was a decent man who left a legacy that has contributed greatly to the success of the present Walt Disney Company.

Ron Miller was born on April 17, 1933.  He met Walt Disney’s daughter, Diane, while he was at University of Southern California and playing for the USC Trojans.  They met on a blind date.  After graduating, he did a stint in the Army and then played one season in the NFL with the Los Angeles Rams.  Walt Disney implored him to join the family business to avoid the injuries he was incurring.  Walt mentored Miller through positions of growing responsibility.  Ron and Diane Miller had seven children.  Miller rose through the rank and eventually became President of Walt Disney Productions in 1978.  He became CEO in 1983, and was ousted in 1984.  Nevertheless, on his watch EPCOT opened, Tokyo Disneyland opened, Touchstone Productions was started, Disney Channel was started, and the film rights to Who Censored Roger Rabbit? were acquired.

He and Diane and Lillian, Walt’s widow, bought land in Napa Valley and established Silverado Vineyards.  Later, Diane, and Ron, transformed a family collection of Walt Disney’s memorabilia and artifacts in a storage space in The Presidio in San San Francisco into The Walt Disney Family Museum.  Diane died in 2013, but Ron continued his strong support to ensure that the museum has grown and flourished.

Walt Disney Productions in the late 1970s and early 1980s was no longer just an animation company.  Theme parks contributed a larger part of the revenue and other aspects of the corporation demanded a larger part of a President’s and CEO’s time.  That feeling of being ‘left behind’ may have contributed to some negative feelings within Disney’s animation community.  It created a bit of a vacuum within Animation that allowed differences between the old guard and Don Bluth devotees and the CalArts gang to fester.  But, there seems no argument that he was always a genuine and decent person.

Examples are the genuinely pleasant interaction when he came out of the Animation building while Randy Cartwright was filming his 1980 Disney Studio tour home movie, and when he took up the challenge of the animators to volleyball game – for the right to run the studio.  Although the Producers lost miserably, and Miller did not give up control of the Studio to the animators, he happily bought the jugs of beers at the post-game gathering.   Animation, and the Disney Company was part of his family.

More details about the volleyball game will be provided in the next post about Darrell Van Citters.

Here are some images of Ron Miller through the years… 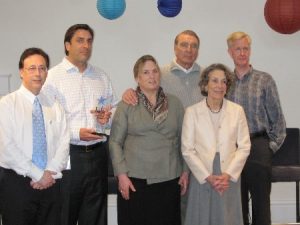