In the finale of the film, the denizens of Toontown sing ‘Smile, Darn Ya’, Smile!‘ as Eddie Valiant, Roger, and Jessica walk off through the broken Acme Warehouse wall.   The producers wanted the London crew to do the singing of ‘Smile, Darn Ya’, Smile!‘ and set up to do the recording during the wrap party.  The London animation wrap party was scheduled for Friday, March 18, at the Barbican Centre.  Robert Watts thought that there might be legal issues if the animators’ voices were in the film without the proper assignation of rights, so Toon Town Ltd, the Amblin Entertainment entity constituted for the production of Who framed Roger Rabbit, prepared a contract for all of the participants to sign.  Frank Marshall had a sock full of £1 coins and gave a coin to each animator at their desk as they signed the contract. 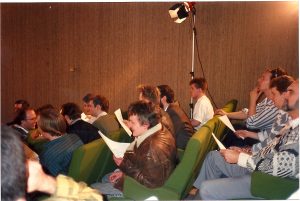 Of course, the event was the subject of some Tom Sito gag drawings. 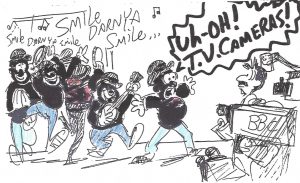 Jacques Muller rented a video camera for the day of the wrap party.  He took some video at The Forum and also at the wrap party at the Barbican Centre and the ‘Smile, Darn Ya, Smile’ recording session.